To Kill or Not to Kill Pinky Penmark's Twin Sister

Get to know Pinky Penmark's alter ego and 'Pinky Penmark Blogs' contributor, Robert Shaffer, in his first post below (Well, technically Robert is Pinky's creator, and Pinky is the alter ego but we try not to mention this when Pinky is within earshot).

We bite our tongue (mostly) as we post this song as one of our previously favorite actresses, Susan Sarandon, in our eyes has poisoned all of her formerly historic work including "The Rocky Horror Picture Show" with her brand of spiteful, woman-hating politics that surfaced in the summer of 2016. More about that after we turn to topic on February13th...And now finally, Robert's blog post..
.

Take a quick glance at this embedded post and screengrabs, and then read on to learn about the #hotpinkmess that was happening at the time... 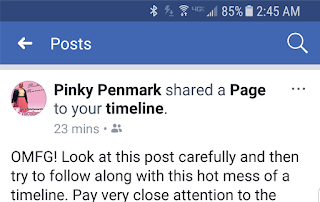 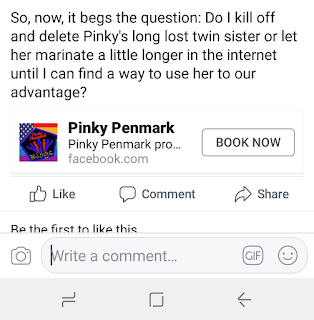 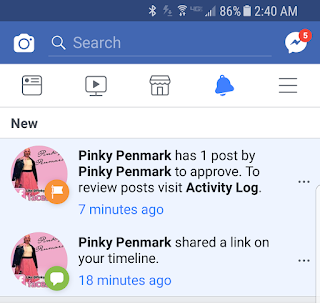 
Backstory: A few years ago Pinky Penmark’s Facebook account in its original form was a personal account. In many situations, Pinky lived and breathed as her own person, not an extension of or a creation of Robert Shaffer. This original Facebook account became caught up in Facebook’s sudden enforcement of its 'real name policy' and was deleted by Facebook. Read the headline-making controversy that affected what Facebook categorized as stage names here: http://www.latimes.com/business/la-fi-facebook-drag-queens-20141001-story.html.


The pictured post and shortened screengrabs are from February 16, 2017.  The artwork in the page’s header that is being shared is accurate to today's date because that's what happens in coding. (While what you may have felt you were leaving behind in your post was a snapshot in time, it was not. The code doesn't point to time. It points to a 'living' object in time. As time moves forward what you left behind changes every day just like you do. If someone put lipstick on the object or switched it out altogether, as above, then what was dated February 16, 2017, looks completely different today then on the day you left it there for the world to see).

Anyhoo, (yes I said anyHOO), back to the number of people in this chain of sharing because it has confused and upset Pinky Penmark and she is mumbling something over in the corner about a long lost twin sister or some crap like that.

Do you see it? By name, there are two. But look closer, there are actually three. You, see, I am only two people, not three. Pinky + Robert = Me. This post is A Different Pinky + Pinky + Robert = Somebody entirely crazier than me. Pinky and I only learned of this Different Pinky tonight because of some sign-in procedures that Facebook had Pinky go through in order to secure her account after an app hijacked her account and was posting on her behalf.

This is where the backstory above comes into play. Back in the beginning, Pinky's account (see the original cover photo on that account? Who the hell approved that) was a personal account and some jealous hussy reported Pinky as not being a real person, and Facebook without warning shut down the account.

Pinky was devastated for about thirty seconds. Then, while looking in the mirror she said, “Screw you, Facebook. Pinky is an  artist anyhow.” She made a beeline for her laptop and Pinky created herself a business Facebook account for an Artist by the name Pinky Penmark. In hindsight, she thanked Facebook for making her see the light and for forcing her to open the account that a person of her lofty standards deserved anyhow.

It was not clear to Pinky and I, after the hacking and restoration of her account,  what we were looking at as we were clicking through Facebook. Something was off. Were we in a time warp? We were so confused that we wondered if people would even believe us so we took the photos below with our phone as proof that time warps are real.  It soon became overwhelming and something told us that in order to escape this odd Facebook world we needed to not merely close the window, as usual, we needed to log the hell out of Facebook. 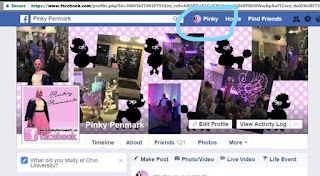 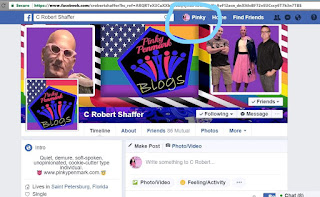 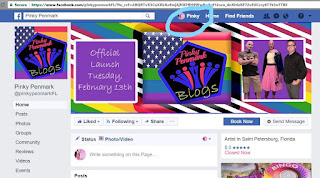 And, that’s when we saw it. Suddenly, we were presented with two sign-in options—one for Pinky Penmark and one for C Robert Shaffer and the associated pages including Pinky Penmark that I manage.  Pinky’s Twin sister was back. Pinky’s face went white while I was thinking “at least time warps aren’t real”.

Evidently and again without Pinky’s knowledge, Facebook had at some point re-activated her original and personal Pinky Penmark account. The thought bubble sticking out of my head now switched to (OMFG! I thought that bitch was dead. Remember that first cover photo? She’s gonna want money. I’ve got to kill her quick). Pinky went mumbling into the corner.

As I was looking for the delete account link on Facebook to kill Pinky’s twin, my mind started to wonder and my thought bubble again switched, “Should I really kill off and delete Pinky's long lost twin sister, or should I let her marinate a little longer in the internet until I can find a way to use her to our advantage?”

I am still considering the possibilities (and sleeping with one eye open).